Dozzu is one of the smaller Kyouma, with an appearance of a cross between a squirrel and a dog, and a small horn on his forehead. When he was in All Heavens Temple, he was disguised as Porta, Nashetania's dog.

When the first generation of Braves sealed the Majin, a dog Kyouma, alongside with a lion Kyouma and a fig fruit Kyouma, watching as the entire Wailing Demon Territory cried, felt an incredible pain and wanted to stop this suffering. The three of them then became friends and started to work together. They became commanders, creating strategies, developing new types and abilities for the Kyoumas, in order to prevent the next Six Braves from sealing the Majin. The three named themselves as: Tgurneu, the fig fruit Kyouma; Cargikk, the lion Kyouma and Dozzu, the dog Kyouma.

After the second generation sealed the Majin, with help of Hayuha Pressio, they began their search for the truth behind the Majin. However, their friendship was destroyed when Dozzu revealed that his plan was to create a world with a new Majin, a world where every creature could live peacefully without killing each other. Cargikk immediately opposed to him and Tgurneu tried to keep the peace between them. Before dying, Hayuha gave Dozzu her Brave Crest believing that he could create this so-called "New World".

Two hundred years ago, Dozzu arranged an agreement between him, Cargikk and Tgurneu, with the help of the Saint of Words, that the first one of them to kill three Braves would be considered the leader of the other two. Dozzu then betrayed the Kyoumas and fled from the Wailing Demon Territory.

Tgurneu and Dozzu both came up with the same plan of creating a fake Brave and having them infiltrate the other Braves to destroy their group from within. Since Dozzu needed the help of a human who had the potential to become a Brave, he created a secret group of humans and Kyoumas who shared his ideals. Eventually, his group's influence reached Piena's Royal Family, where he would meet Nashetania who would later become his fake Brave.

Dozzu's goal is to stop the fighting between humans and Kyoumas and create a world where both can live together in peace.

Dozzu has a relatively calm and down-to-earth personality, he usually keeps himself composed in all situations. Just like Nashetania, Dozzu will do anything to reach their goal and is willing to ally with his enemies and bring bloodshed to accomplish his ideals. He is very intelligent and seems to understand human feelings and emotions rather well after spending many years in the human world, being the most human-like of the three commanders in terms of personality. He has shown his cleverness in being able to make the Six Braves do as he wants, revealing important information to them but keeping some things for himself so that he is still useful and they would hesitate to kill him. Dozzu has also shown he is good at acting and lying, fooling Goldof to an extent when Nashetania was captured by Tgurneu.

Dozzu can create electricity which he can use to attack with in the form of lightning, and is said to be the only Kyouma with such ability. He can also change his appearance and has a form of self-healing.

Dozzu and Nashetania are companions who share the same interest to create a peaceful world between Kyouma and humans. They claim that one would never betray the other, as shown when Nashetania is taken hostage by Tgurneu and Dozzu follows his orders to protect her. Dozzu is also shown to like to spend time on her lap while she pets him as if he were still disguised as her dog.

Since Dozzu spent a lot of time disguised as Nashetania's dog, he is well aware of Goldof's strength and devotion to his princess. However, he understands that Goldof will never truly join his side because their plans often put Nashetania in potential danger which is something Goldof would never agree to. Despite this, Dozzu is honestly grateful to him when he manages to save Nashetania. 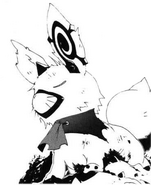 Dozzu in volume 3, chapter 3
Add a photo to this gallery
Retrieved from "https://rokkanoyuusha.fandom.com/wiki/Dozzu?oldid=8378"
Community content is available under CC-BY-SA unless otherwise noted.